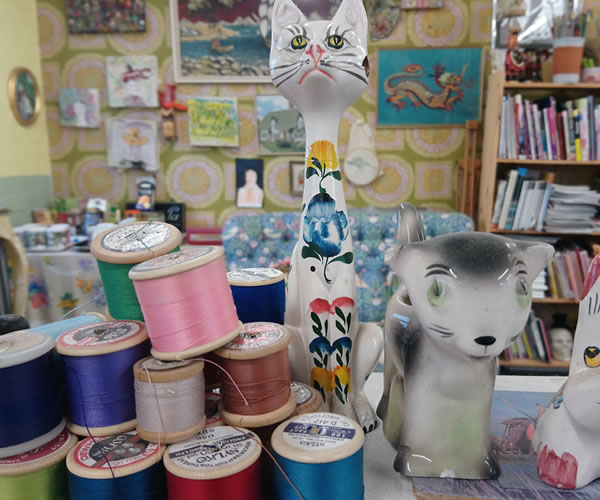 I had been based in the iconic Fishmarket but it got to the point where I needed more space. When I went and saw the space at Burns Street Studio, which at the time was just a huge, empty room, I had a really good feeling about it. I could imagine myself running workshops and happily spending my days designing and making. So, with investment from the Northants Community Foundation, and some help from local pals, we sectioned off the space by building stud walls, added a kitchen (crucial for endless cups of tea) and built the cutting tables.

It’s hard to describe the studio as it looks now, it’s a space you need to see to understand. It’s been described as an explosive tinder box of colour. Your eyes fall on things to touch, feel and pique your curiosity as they travel around the space, finding so much to focus on. Of course, the studio has the industrial machines, materials and worktables that you’d expect to see, but it’s not the clinical, white-walled, Ikea-sponsored space you might find elsewhere. I mean, we have a ‘Nan’s lounge’ which is exactly how you’d imagine it! It’s for knitting, quiet sewing and enjoying cake.

One thing you won’t see in the studio is a clock. I want people who come to my workshops and be immersed in what they’re doing. The time you spend here is precious, it’s a gift from me to you. I want to share my world and for you to be part of it.

We use cookies on our website to give you the most relevant experience by remembering your preferences and repeat visits. By clicking “Accept All”, you consent to the use of ALL the cookies. However, you may visit "Cookie Settings" to provide a controlled consent.
Cookie SettingsAccept All
Manage consent

This website uses cookies to improve your experience while you navigate through the website. Out of these, the cookies that are categorized as necessary are stored on your browser as they are essential for the working of basic functionalities of the website. We also use third-party cookies that help us analyze and understand how you use this website. These cookies will be stored in your browser only with your consent. You also have the option to opt-out of these cookies. But opting out of some of these cookies may affect your browsing experience.
Necessary Always Enabled
Necessary cookies are absolutely essential for the website to function properly. These cookies ensure basic functionalities and security features of the website, anonymously.
Functional
Functional cookies help to perform certain functionalities like sharing the content of the website on social media platforms, collect feedbacks, and other third-party features.
Performance
Performance cookies are used to understand and analyze the key performance indexes of the website which helps in delivering a better user experience for the visitors.
Analytics
Analytical cookies are used to understand how visitors interact with the website. These cookies help provide information on metrics the number of visitors, bounce rate, traffic source, etc.
Advertisement
Advertisement cookies are used to provide visitors with relevant ads and marketing campaigns. These cookies track visitors across websites and collect information to provide customized ads.
Others
Other uncategorized cookies are those that are being analyzed and have not been classified into a category as yet.
SAVE & ACCEPT